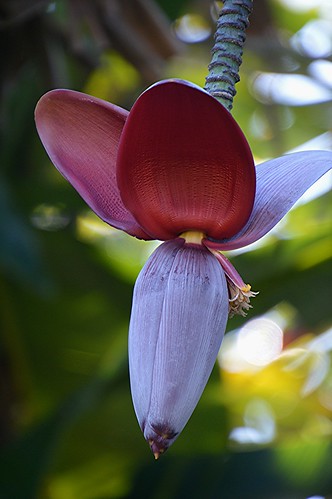 Bananas are the staple starch of many tropical populations. Depending upon cultivar and ripeness, the flesh can vary in taste from starchy to sweet, and texture from firm to mushy. Both skin and inner part can be eaten raw or cooked. Bananas’ flavor is due, amongst other chemicals, to isoamyl acetate which is one of the main constituents of banana oil.

During the ripening process, bananas produce a plant hormone called ethylene, which indirectly affects the flavor. Among other things, ethylene stimulates the formation of amylase, an enzyme that breaks down starch into sugar, influencing the taste of bananas. The greener, less ripe bananas contain higher levels of starch and, consequently, have a "starchier" taste. On the other hand, yellow bananas taste sweeter due to higher sugar concentrations. Furthermore, ethylene signals the production of pectinase, an enzyme which breaks down the pectin between the cells of the banana, causing the banana to soften as it ripens.

Bananas are eaten deep fried, baked in their skin in a split bamboo, or steamed in glutinous rice wrapped in a banana leaf. Bananas can be made into jam. Banana pancakes are popular amongst backpackers and other travelers in South Asia and Southeast Asia. This has elicited the expression Banana Pancake Trail for those places in Asia that cater to this group of travelers. Banana chips are a snack produced from sliced dehydrated or fried banana or plantain, which have a dark brown color and an intense banana taste. Dried bananas are also ground to make banana flour. Extracting juice is difficult, because when a banana is compressed, it simply turns to pulp. Bananas fried with batter is a popular dessert in Malaysia, Singapore, and Indonesia. A similar dish is known in the United States as banana fritters.

Plantains are used in various stews and curries or cooked, baked or mashed in much the same way as potatoes.

Seeded bananas (Musa balbisiana), the forerunner of the common domesticated banana, are sold in markets in Indonesia.

Banana hearts are used as a vegetable in South Asian and Southeast Asian cuisine, either raw or steamed with dips or cooked in soups and curries. The flavor resembles that of artichoke. As with artichokes, both the fleshy part of the bracts and the heart are edible. The tender core of the banana plant’s trunk is also used in South Asian and Southeast Asian cuisine, and notably in the Burmese dish mohinga.

Banana leaves are large, flexible, and waterproof. They are often used as ecologically friendly disposable food containers or as "plates" in South Asia and several Southeast Asian countries. Especially in the South Indian state of Tamil Nadu in every occasion the food must be served in a banana leaf and as a part of the food a banana is served. Steamed with dishes they impart a subtle sweet flavor. They often serve as a wrapping for grilling food. The leaves contain the juices, protects food from burning and adds a subtle flavor.

Special Bonus: Save 10% Off Wine of The Month Club (Don't Miss This!) 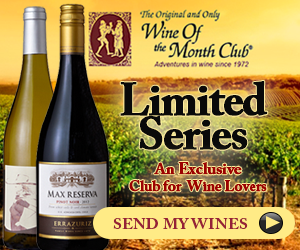 Want to Win the Car of Your Dreams?

The Best Wine Lovers Fashion. Period.™
Sign up below for an exclusive coupon code you can use instantly on your first purchase :)
This is a limited time offer

Special Bonus:  Save 10% Off Wine of The Month Club
(Don't Miss This!)
Offer Expires In:
NINE WINE® Limited Time Offer

Want to be the Next MicroCap Millionaire?
(Don't Miss This!)

on your first purchase :)